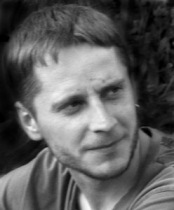 Biography
Vyacheslav was born in 1980 in Novgorod. In 1999 he entered Rakhmaninov State Art School in Novgorod and was trained in teaching art and a wood engraving worker. From 2001 to 2004 he studied and worked in a workshop of art designer A. Mokrinsky. Vyacheslav makes small-scale sculpture. He works in technique of welding and hammering. He works with such material as metal, stone, wood.

«From the Varangians to the Greeks»