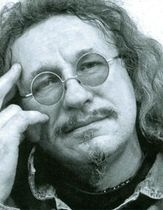 According to his family tradition he studied in Krasnoselskoe Art-Industrial School (1969-1972), and became a master on art metal working.
In 1972 he started work in Tomsk, Siberia, created jewelry and took pert in exhibitions in Tomsk, Ulan-Ude, Barnaul, Krasnoyarsk and Moscow.
In 1984 he became a member of the Artists' Union of Russia.
In 1989, 1991 and 1993 he participated in international biennale on modern lacework in Brussels, Belgium.
In 1989 his composition obtained recognition of Fabiola, the Queen of Belgium. She bought his composition «Nocturnal Butterfly» and handed it to the Metropolitan Museum in New York, the USA.
In 1987 and 1992 he took part in international plain-airs on art enamel in Palanga, and in 1992 in XI international enamel biennale in Limoges, France.
In 1995 he took part in the exhibition of quilts dedicated to the 500-year anniversary of America discovery by Columbus, taking place in New York, he got a diploma for one of his works.
Since middle 1990s he painted a lot and took part in international plain-airs and painting exhibitions in Torre-Cavenezze (Italy), in Alytus (Lithuania); his works were exhibited in international artists association "Solnechny Kvadrat" in Moscow.
In 1998 on his first personal exhibition he showed collage and sculpture works.
In 1999 he had one more personal exhibition of sculptures together with pastel this time; and in 1999 he took part in international plain-air and sculpture exhibition in Rostok, Germany.
He had also personal exhibitions in 2000, 2001, 2004 and 2005 in Vologda, in 2004 and 2006 in Saint Petersburg, in 2004 in Prague, in 2007 in Totima.
There are his works in museums and private collections in Russia (Moscow, Vologda, Kostroma, Yaroslavl, Tomsk, Krasnoyarsk, Barnaul), the USA (New York), South Korea (Seoul), Finland, Germany, Belgium, Croatia and Czech Republic.