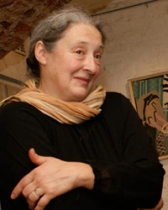 Marina Spivak was born in 1955 in Leningrad. In 1977 she finished Serov Art School, Sculpture Department. Since 1986 she has been a member of Artists' Union of Russia. She was working in San-Francisco as a participant of art-ecological project «All for One Earth», in Birmingham in Polytechnic college at Sculpture department (bronze casting, lections on Petersburg's Sculpture School), in Paris at Serg Plantere's.

«...In many ways sculpture stylistics of Marina Spivak was defined by negotiation of an academic tradition, dominated in Leningrad. Nowadays Marina Spivak is at the peak of her career... Becoming a mature and wise master, she does not stop at familiar field for us, she opens up new areas of art and makes unexpected projects. But first of all she remains a sculptor,  laconic and enthusiastic artist.» Vladimir Drozd

Her works can be found in the State Russian Museum, Yaroslavl Art Museum, The Anna Akhmatova Museum at The Fountain House, Russian Ministry of Cultural Affairs.

Her Books are in the library of National Museum in London, Paris National Library, Madam Levek Children's Library (Paris), in Helsinki, and in private collections in Russia and other countries. She has been exhibited since 1977.