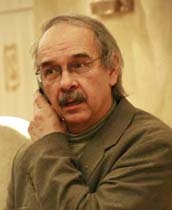 He is a participant of more than 160 exhibitions in Russia and abroad, including exhibitions in Sweden, Bulgaria, Hungary, Italy, Slovenia, the UK, Germany, Turkey.

There are his works in collections of State Russian Museum, Ministry of Cultural Affairs of Russia, in management office of exhibitions of Artists’ Union, City Sculpture Museum of St. Petersburg, in Museum of Antalya University in Eskishekhir, Turkey, in the buying committee of the State Tretiakov Gallery, and in private collections in France, Switzerland, the UK, the USA and Denmark.

«A glance at the sky»