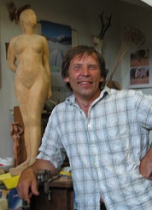 He is a representative of St. Petersburg sculpture school; in 1976 he finished Art School named after V. Serov and in 1984 he graduated from the Repin State Academic Institute of Painting, Sculpture and Architecture from the Sculpture. He had a training course in a workshop of M. K. Anikushin.

He is an author of many easel works, but since the end of 1990s he has been working mostly with wood. It is easy to identify his technique and his manner. In spite of schematism of his figure works characters, which is partially conditioned by cover of latten parts of different colors and geometrical shapes (so called patchwork cover technique), and their blind accents, all of them have  strongly marked grotesque features. As a rule, sculpture plastic stresses some specific or professional movement («Astrologer» (1994), «Hockey player» (2001), «Riding a scooter» (2001), « Playing blindman's buff» (2001) and others).

1952 was born in the Yaroslav Region
1970-1976 studied in Art School named after V. Serov, majoring in «Scene painting»
1984 graduated from the Repin State Academic Institute of Painting, Sculpture and Architecture from the Sculpture, Sculpture Department
1985-1988 had a training course in Sculpture workshop of Art academy
1988 entered Russian Union of Artists
Since 1982 he participates in republic and international exhibitions, including exhibitions in Goteborg, Sweden (1988), Holland (1998)

«Girl with a looking-glass»