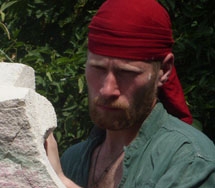 He was born in 1971 in Leningrad in a family of art architector. He got education on Sculpture and became creatively mature in an artistic workshop of Sergey Aslanov and at classes in British Royal Academy of Art. He also graduated from Repin State Academic Institute of Painting, Sculpture and Architecture from the faculty of Fine Arts Critics and History of Fine Arts.

«A portrait of a Girl»